It has occurred to me that this blog should have been started as “My Backward Diary”. Everything I do, think and believe is predicated on the life I have lived. I move on and view life through the prism of my past, which then reflects on my future path. And so I begin the march toward the end.

After hearing pundits bewail the adversities of staying home for this pandemic,  and warning listeners  that people need to be more self sufficient (bring your own toilet paper) when they start going to parks, beaches, campgrounds and the like, I was transported 70 or so years into the past.

My family ended up in a small town in eastern Washington for a few years of my childhood. Kennewick was one of what we called then the Tri-Cities. We would walk across a bridge to Pasco in  order to spend some hours in a public swimming pool, and

My family held a parcel of land on a small, hidden lake near Seattle, acquired before our move to eastern Washington.  Land only, no building, no amenities. Our bathroom was whatever log was hidden and convenient. The first thing that got built was an outhouse back in the woods that was in use for all of my childhood and teen years. We spent vacations for many summers living in sleeping bags and cooking over camp fires while working on a small cabin about as big as a large walk in closet.  One year we piled my

horse into an old, wooden, roofless one horse trailer and drove across Washington, over mountains and rivers to reach our lake property. The highway of the time consisted of  two lane roads through miles of nothing but fields, hills that occasionally held a few grazing cattle, and trees by the side of the road that were our only bathrooms for much of that long journey.

That kind of background undoubtedly prepared me for later years. There was the month or two when my husband and I moved to California. No money, no place to stay. We spent most of those nights in a mountain campground, cooking burgers over open fires and sleeping in the car with two dogs. Days were spent in town looking for work and a room or apartment in which to live. We found both, and moved forward with our lives.

Some years later, as a new mother, I was destined to fly across the ocean to Okinawa to be with my then soldier husband. I believe there were three of us with babies, crammed into a packed, propeller driven, old carrier plane. The plane had its problems from the start and had an unscheduled landing in the Philippines. To kill time until boarding we took a cab drive, in the heat, around the island. Back on the plane the air conditioning blew and the babies were burning up, and understandably crying. After an interminable flight the pilot informed us to be prepared for landing.  I looked out and saw nothing

but beautiful, blue, clear water…we were landing on the small coral atoll that appeared as we dropped further down. It turned out to be Wake Island! Another unscheduled landing in an excessively hot, cramped, uncomfortable plane. All the passengers were upbeat, welcomed the care our Island soldiers gave us, and dealt with the lack of amenities for our overnight stay. We just hoped the repairs the plane needed would get us safely on the final leg of our journey!

Four or five years down the road I was left alone with a small daughter to raise by myself. For a few miserable weeks we ended up in a cheap hotel inhabited by winos and addicts. Door constantly locked, sandals in the communal shower. We survived, and walked into a government subsidized apartment that was clean, airy and warm. As time rolled by and she grew a bit older we got involved with horses. She joined Pony Club, and we ended up at rallies and schooling shows. Where to go when nature calls? The nearest 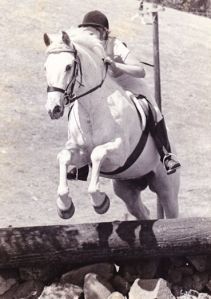 port-a-potty. Those small, smelly cubicles were also used by young riders as dressing rooms to do quick changes. Most of those kids didn’t flinch at the prospect, but looked toward their goal and were grateful for what they had. We managed to afford the lowest rungs of this society by cleaning stalls and grooming horses…both of us. It taught her the value along with the privilege of working for, and earning, what you desired. It taught me how tired one could get after working all day at a job and spending my down time mucking stalls!

Years later, when we both had office jobs, we were amazed by the attitudes of some workers. One lady insisted on going home for lunch, even though the drive ate up most of the hour, because she could not, would not use public bathrooms. As the horse world changed around us we began to see young people who had never even groomed their horse. They had grooms at their show barns who did all the maintenance and preparation for the riders, and sometimes the trainer even warmed the horse up for their client .

parents who hover so tightly they have earned the title “helicopter parents”. Rich parents are bailing their kids out of trouble and buying their way into Universities that would otherwise not grant them admission. My daughter has seen young employees, just hired, asking how they can take the next step up and how soon, without spending time proving their worth. We have heard individuals extolling their own value while not completing their projects adequately. What happened to the hard working, self reliant, pragmatic and practical citizenry that got us through WWII, to the moon and conquered Polio?

To be fair, there are many young people who are galvanized at this moment to fight for mother earth, equality, and against police brutality. Sadly many of our new agitators come to activism through experiencing trauma, as in the school shootings, or watching actual murder of handcuffed prisoners on their computer. Lets hope that by encouraging all of us to raise our voices for a healthy planet and human justice, this new generation, with our help, makes an impact towards progress and sanity. Not to mention the ability to survive without toilet paper (remember the old Sears Roebuck catalog?). Perhaps parents should allow their children to run free, fall down, and rise to run again! That was how many in my generation were raised. Maybe young riders could groom and saddle their own mounts. And it might be possible for your son or daughter to go to college, albeit a less well known institution, without your buying their way in. Self reliance comes from experiencing failure and learning how to rebound and use what you have learned.

The first time my young daughter came off the lesson horse she was riding my gut reaction was : first, check and make sure she was not injured. Second, look at that face screwed up ready to cry, and cheerfully, with a chuckle, say, “well you fell off! I guess now you will have to get back on and try again! ” The threat of tears magically melted into a tentative smile, she managed to ” take a deep breath, pick herself up, dust herself off, and start all over again!”  It is how we learn, how we thrive, and how we got to the moon.

2 thoughts on “Take a Deep Breath”

because listening to our horses makes us into better humans