My driving odyssey begins, strangely enough, in my eighth year. Try, try , try, I could not read the blackboard in school. Next step, see an eye doctor and discover I was deeply near sighted.  The one moment I vividly remember is waiting for the bus, sporting my new glasses, and looking down at my feet…oh my god, I could see individual blades of grass! (Of course that is not what I said, horrors, not in those days!) Thus began my lifetime relationship with  an extra “appendage” on my nose.

Fast forward to 1954 when I was old enough to begin the road to driving. The country was coming out of a time when not all women were drivers, and those that were drove only when their husband was not in the car. There were brave outliers, or single working women (generally looking for a husband). However, the general consensus was women drivers were a danger, or comedic, or both on the highway. 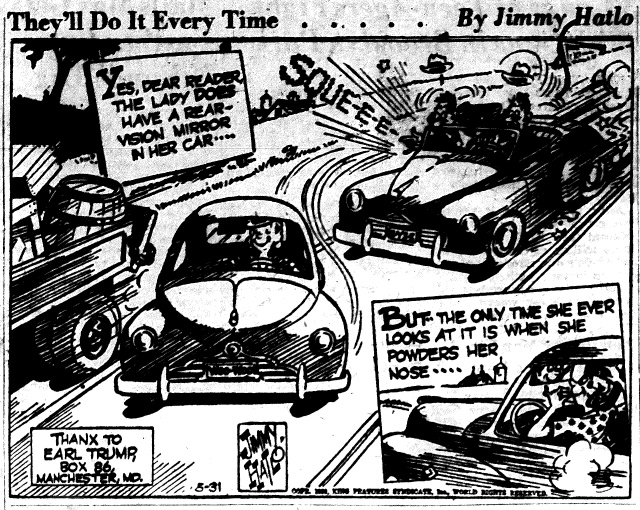 Slightly before I actually applied for a learners permit, someone, I believe it was my older brother, let me try driving on a forest road in the backwoods. As I recall the car ended up nose to nose with a bush.  Thus ended his desire to teach little sister to drive! The next move was visiting the DMV with my father and going through the paper work to start legally learning to drive. This included reading the eye chart with glasses perched on my sensitive teen years nose prompting my father to explain to the agent that his daughter was blind as a bat.  Imagine how the feeling of denigration and unworthiness washed over my youthful self! The next nail in my desire to drive came when a female relative applied for her license and failed the test. She ultimately qualified, but the damage to my psyche was complete.  No driving, and I could avoid being laughed at, feeling inadequate and altogether stupid.

So, I did not drive until my late twenties when the army let my husband go, and  he spent his release money on an aged Jaguar (that we later had reason to believe had been used for smuggling pot!)  He patiently worked with me on honing my driving skills, and wonder of wonders, I took my driving test in a Jaguar and passed first time!

By now women drivers were quite common and actually expected to be ferrying their kids around. Life intervened, including separation, divorce and loss of a Jaguar to drive. Instead I became a Pony Club mother/leader and purchased a mini pickup to ferry animals, kids, tack, jump poles…you get the picture! One shining moment was carrying a pick up bed full of kids up the side of Mt. Diablo to the kitchen building.  There was always a line for our “taxi”, out in the open air on a mattress in the truck bed!

The real challenge was my daughters first vehicle, an old, commercial van that she purchased for $500 and promptly named Charlie. It was great for pulling her horse trailer, and she drove it beautifully. Being the only vehicle I had available while she was interning overseas was difficult, to say the least, but I overcame my anxiety and limited my driving to a bare minimum! Not to say it didn’t cause embarrassment. Charlie coughed out fumes fairly often when waking up, and one day I made the mistake of starting him in a local mall without checking the rear view mirrors. I believe the poor lady walking past our back end was a bit surprised, and not in a good way!

Ultimately that morphed into a pink pick-up truck my daughter acquired that was…barely…capable of pulling a two horse trailer. My big brother took one look and asked my daughter  “what does your mother think about driving that truck?”  It probably seemed impossible that his wimp of a sister could even drive such a vehicle (he had never seen the van), much less love it, as she assured him I did (it was so much easier than Charlie! Not to mention physically more comfortable!).  I had become the regular hay-pick-up driver on weekends, while my daughter worked horses or repaired the barn destruction caused by said animals! That continues to this day, only now my vehicle is a bit larger, silver Dodge Ram pick-up.

I began by eschewing driving any vehicle at all. Much of the reason for that attitude stemmed from my early observations of how women drivers were viewed, how girls with glasses were teased and denigrated, and fear that I would fail the test as my relative did. Unfortunately I was not equipped with the defiant determination and bravery of the early feminists, or perhaps I lacked sufficient motivation to drive a car. There is no question that my late entry into becoming a driver impacted my confidence level to some extent, made me a bit more cautious (no, I do not dawdle, I drive the speed limit but obey signs and laws), and kept me humble enough in that respect to avoid joining the “I am such a good driver I can weave through traffic, do illegal U-turns, etc.” club.

I allowed societies view of women during that era to affect the trajectory of at least one aspect of my life. My daughters generation was fortunate to live in a different time. She was expected to drive and took Driver’s Education and Training in her school, obtaining her license at 16 and taking over our car from that moment! How the times have changed…except, of course, where they haven’t.

because listening to our horses makes us into better humans