The media creates “a star”, the public embraces the concept, and here we go again. The news hawks realized after 2016 that there were many missteps in their coverage of our presidential election, not the least in giving Donald Trump a load of free advertising during the primaries while screaming about Secretary Clinton’s e-mails from day one until the final defeat of political norms and civil discourse. Many claimed to have learned their lesson and would take more care…not happening. Alexandria Ocasio-Cortez tugged at news people’s heartstrings when such a relatively inexperienced young woman unseated a long standing (male) democratic Representative. I was one of her applauders, happy for all the women who won, therefor upping the percentage of female representatives in Congress. She was lucky to be in a very blue district, which was not true of other freshmen elected on the Democratic ticket.  This made theirs a harder fight and a more tenuous seat to hold at the next go round.

So here she is, a freshman congresswoman meeting other freshmen for the first time. Lo and behold, she meets 3 women with like minds, and, similar to girls entering high school, forms an in group which she proudly calls the squad. All of that 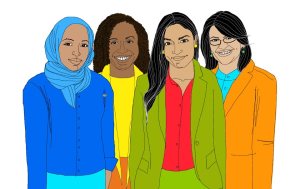 is fine, if a bit girly and immature. Hopefully the squad will listen and learn?…not happening. Centrism is anathema to the squad, and best to bulldoze it to the ground immediately and force the house to bend to their agenda.

When I was in graduate school one of the lessons that came across loud and clear was “learn the norms, the boundaries, the rules first, then find out how far, in which direction, you can stretch them and carefully expand the territory”. Those who went in with a meat cleaver generally created a mess, kind of similar to what the Tea Party ended up accomplishing with the GOP!

Representative Ocasio-Cortez started her new job by misspeaking numerous times. Just one example is her statement that the constitution was amended to “make sure Roosevelt did not get re-elected”. The amendment was proposed and passed two years after Roosevelt died in office! There were other incorrect statements, they can be found in fact checks on line. To give her credit, after running for office with a somewhat anti Speaker Pelosi attitude, she did vote for her in the house vote. But somehow she then expected Speaker Pelosi to bend to the “squad’s” agenda and ignore the concerns of their peers who overturned (for the moment) solid red districts!

The Speaker has been accused, by members of the “squad”, of disrespecting them merely because she pointed out that they were only four votes out of 435 total members or 235 Democratic members. One of the insinuations indicated it was because they were women of color. Never mind the other House Members of color who have been there for years, never mind her backing Obama and his legislation, never mind she is from one of the most diverse cities in the country.

Trump was elected because his followers felt Washington was “broken” and not working for them, look what that has done to the country. You claim the four of you were elected in order to upend the broken system, tearing it apart and beginning again.  Shouldn’t repairing the system be the goal? If you cause chaos you are a mirror image of the Tea Party, and look what they have done to the GOP. Freshman are there to learn, offer ideas, stand up for their constituents, and mature into their

important (but not dictatorial) roles. Power does corrupt, please don’t allow the heady elixir of being elevated to a seat in Congress cause the four of you to feel the House needs to follow blindly where you lead. You are not Trump, and Democrats do not subscribe to cults and dictators. Visualize your perfect solutions, by all means, but for all our sakes listen to experience, and learn how to move the lines in your direction without hurting your fellow members abilities to maintain the majority, and without causing total destruction of our society….that is apparently Mr. Donald Trump’s job!

“I’m so surprised that the emphasis on aging here is on physical decay, when aging brings such incredible freedom. Now what I want most is laugh. I don’t want to hurt anybody by laughing — there is no meanness to it. I just want to laugh.” — Isabella Rossellini on Oprah, September 2009